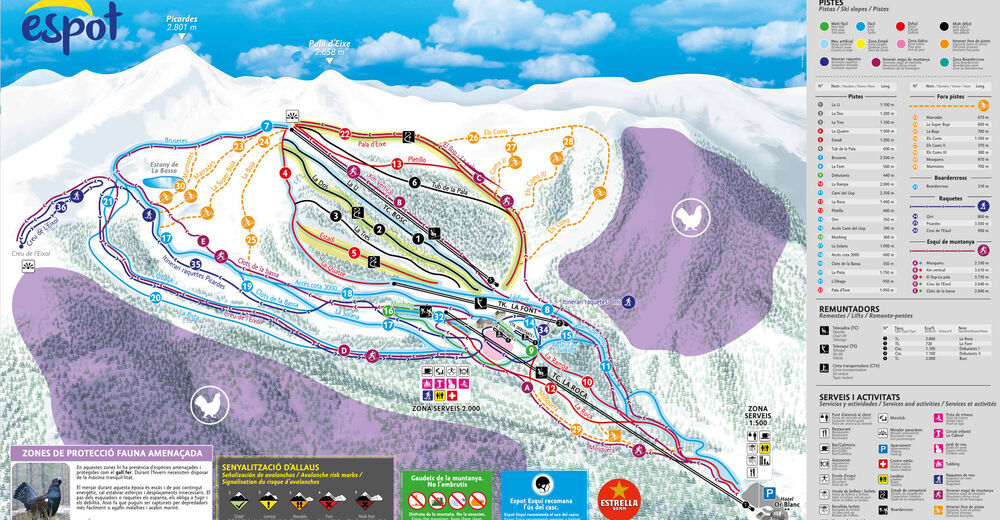 The ski resort Espot Esqui enjoys a privileged place in the Pyrenees, as it lies next to a National Park - the Sant Maurici Aigüestortes. The station has 20 slopes and 1000 meters difference in altitude (1500 - 2500 m).

The ski resort and its slopes are characterized by the lush black pine forests, as well as by the beautiful view of the more than 3,000 meter high mountains. Espot Esqui is known for good snow quality, ultimately, by the coverage of 60% with artificial snow.

In addition, three runs for the staging of international competitions are allowed, what gives an idea of ​​the slope variation. For beginners a large area and also a big children's snow garden is available at the station 2000. This allows parents and children to enjoy a day together in the snow.

The ski resort is known home and abroad for numerous competitions in winter sports, So 2016 the World Cup in Telemark will take place.

The village of Espot, just 2 km from the station, is a beautiful Pyrenean typical rural village, as the tradition well combined with the modern requirements of hotel facilities and thus represents a gateway to the ski resort and the National Park.

Espot Esqui, a family resort for those who want to combine skiing with the warmth of a typical mountain village.