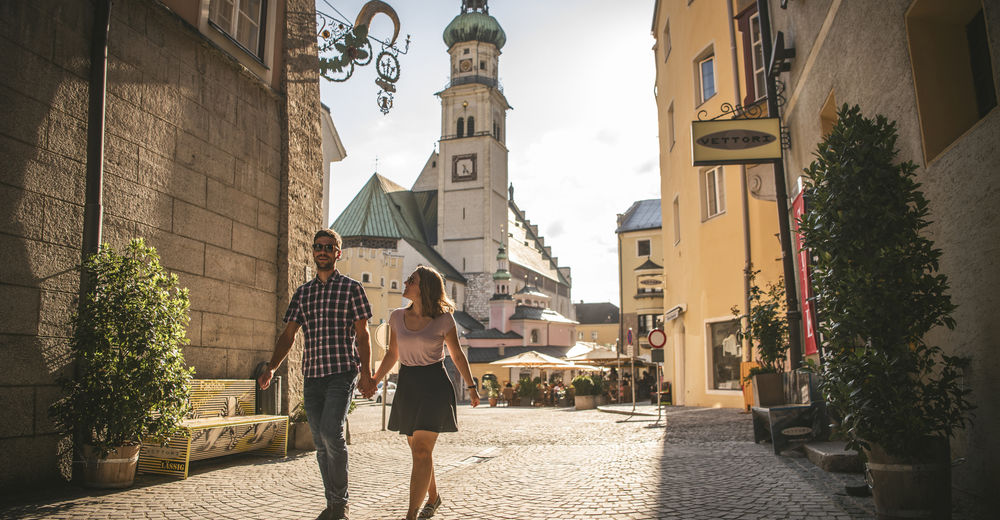 If you go on a journey of discovery to medieval Hall, you will find yourself in what could well be the Tyrol's most beautiful town. It certainly has one of Austria's best-preserved historic cores − it's actually even bigger than Innsbruck's − and serves as an excellent example of how a successful symbiosis with modern architectural designs can be achieved, e.g. the salt warehouse, the new UMIT university and the Parkhotel.

The fine buildings in Hall's Old Town testify to the settlement's prosperous past. Salt mining in the Middle Ages transformed Hall into the north Tyrol's main commercial centre. Even then the town was an important trading post on the River Inn, and in the middle of the 15th century the provincial mint was established here, thereby creating the important preconditions for the advancement of the town to even greater commercial prosperity.

Today Hall is a vibrant town with a real zest for life; visitors can sample a wide variety of shops and savour high-class hospitality within historic walls. Every year, the lovingly restored Old Town and the Burg Hasegg complex with its Mint Tower and accompanying Mint Museum enchant visitors from all over the world. Town and country come together regularly for a mutually fruitful exchange at Hall's stylish Christmas market, the Radish Festival and the Organic Mountain Farmers' Festival. Cultural highlights such as the Tyrolean Easter Festival, the Sprachsalz literary festival or the Musik plus series of events are well known way beyond the town's boundaries, and in 2004 Hall became a university town. The focus for the new Tyrolean UMIT Provincial University is on forward-looking themes such as Medical Informatics and Nursing Care.

An extract from Hall in Tirol's time-line: The first mention of a settlement here was found in documents dated 1256.The name derives from the Middle High German word "hal", meaning a salt mine or source of salt. A document from 1316 mentions the town "Hall im Inntal", but from the 19th century it was generally known as "Hall in Tirol". Between 1938 and 1974 the town's name was changed to "Solbad Hall", a reference to its one-time popularity as a spa town.At the start of the 13th century, the salt mine was the principal source of the town's prosperity. The brine was collected in the Halltal Valley, passed through a wooden pipeline to the "Sudhaus" or salt works boiler house by the Inn, where it was converted into salt. Hall's salt was exported mainly to the Rhine area, to Switzerland and the Black Forest. In 1281 the newly-built Nikolauskirche was consecrated. This church was modified into its present dimensions around 1425/1426 and then renovated in Baroque style in the mid-18th century. Until 1786 Hall was a junior partner to Absam church. Thereafter it became an independent parish. In 1826 the seat of a deanery was established in Hall.In 1303 Duke Otto of Carinthia/Tyrol granted Hall the same municipal rights as Innsbruck. The town grew in the following centuries to become the most important trading town in the north of Tyrol. As a result the Old Town area grew and Hall became by far the largest town in northern Tyrol. In 1342 the hospital was established in the town centre, initially on the Lower Town Square. Today, the site is home to the Monastery of the Order of the Franciscan Tertiary Sisters. Centuries later in 1914, Hall´s "Spital" was re-born as today's district hospital. In 1356, Hall was granted the right to hold two annual fairs, and these evolved into major international events. The markets were initially held in the Salvatorgasse (the road was then called Marktgasse). After 1406, the markets were staged on the meadow (Anger) north of the Town Hall. In 1406, the ruling prince donated the so-called "Königshaus" or Royal House to the town. The "Königshaus" is used as the Town Hall. In 1447 a huge fire destroyed much of the city. The subsequent reconstruction work led to decades of prosperity among the different social orders and businesses. Over 300 buildings were constructed during this phase.

In 1452 the town was granted the so-called "Lendordnung". This gave the inhabitants of Hall sole rights to trade imported and exported goods transported on the River Inn. But river traffic ended in the 14th century when a timber rake was extended across the river to catch driftwood for burning in the nearby salt works. The river was blocked at this point until 1857. In 1477, the provincial mint of Merano in what is now South Tyrol moved north to Hall. Initially it was based in Ansitz Sparberegg and then from 1567 in Burg Hasegg. In 1809, however, the mint was closed. However from 1975 onwards Hall Mint with the Mint Museum struck coins or medals for special occasions. These included, for example, the Olympic Winter Games in Innsbruck or the 500-year anniversary of the Hall "dollar". To mark the anniversary, 500 schilling souvenir coins were minted in the silver of the Republic of Austria. But basically Hall Mint & Mint Tower is a museum, where exhibits illustrate not just the technology used to emboss coins, but also the wider history of town. In 1486 Hall Mint embossed the "Taler", also called "Guldiner". The word "dollar", i.e. the U.S. currency and that of many other countries, is derived from the German word.In 1534 the merchant Wolfgang Vitl from Ausgburg built a glassworks here, and it prospered until well into the 17th century.1567 saw the founding of Hall Convent and the neighbouring Jesuit monastery. Before then the Augustinian monastery was near the Salvatorkirche. This was followed by the opening of the Franciscan Monastery (1645) and the Poor Clare Monastery (1723) near what is now the psychiatric hospital. Of the two monasteries, only the Franciscan Monastery remains today. Other orders were founded in the 19th century: the Sisters of the Holy Cross, the Sisters of Charity and the Salesian Sisters. In 1670 a violent earthquake caused a huge amount of damage. There were actually a series of quakes and a large part of the town was destroyed. During the subsequent reconstruction, many of the town houses, and also the sacred buildings, were finished with ornate Baroque facades. In 1740 61 buildings in the Fasser quarter were destroyed by fire. In the same century another catastrophic fire destroyed 42 houses.

In 1858 the railway came to Hall. The new means of transport led to a decline in river trade and the town fairs also suffered. Of interest to the tourist business: in 1930, a sanatorium and soon after, the Park Hotel, opened (along the same lines as other thriving spa towns such as the Bavarian town of Bad Reichenhall). However, hopes that the Solbad, or brine baths, would bring a new prosperity to the town were dashed because of the ubiquitous effects of the global economic crisis in the late 1920s. After World War II a number of new residential areas emerged. In 1967 the salt mine closed. This significant moment ended Hall's long history as a salt town.In 1972 the new Inntal autobahn was completed. The residents of Hall got a new bridge over the Inn and direct access to the new highway. This highway quickly became the most important traffic artery for north-south traffic through the Alps.A year later work started on a facelift for the Old Town. In the following years some 300 houses in the Old Town area were smartened up. At international level, the renovation of the Old Town attracted a lot of positive attention and the awards culminated in 1984 in the conferral of the 1st Austrian State Prize for Conservation. In 1986 the town was in receipt of another award, this time the Council of Europe Flag of Honour.To mark the 700th anniversary of the town's acquisition of its municipal charter, the new, futuristic glass tower at the Park Hotel became a highly visible landmark. The historic section of the Park Hotel designed by the architect Lois Welzenbacher was restored to its original appearance.

In the same year, the museum documenting the history of the minting machines, Hall in Tirol Mint and the Mint Tower, opened with a new, enlarged display area. The prized exhibit is the reconstruction of a roller minting machine from the 16th century. The Mint Museum bears the Austrian Museum Quality Seal.Hall became a university town in 2004. Located on the western outskirts, UMIT, the private Health and Life Sciences University, is housed in the Eduard Wallnöfer Centre for Medical Innovation. Among its specialisms are medical computer science and technology.

In subsequent years, Hall in Tyrol has emerged as a vibrant town that attracts from near and far visitors who love to wander through its historic core.

We are always here to help 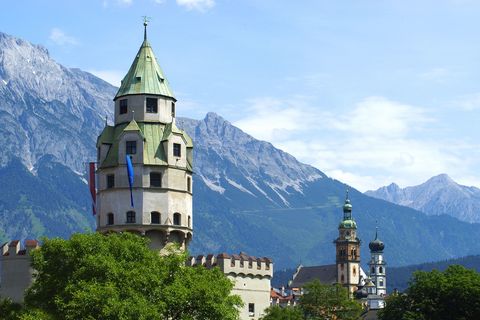 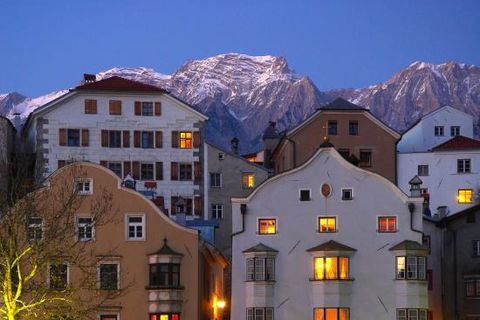 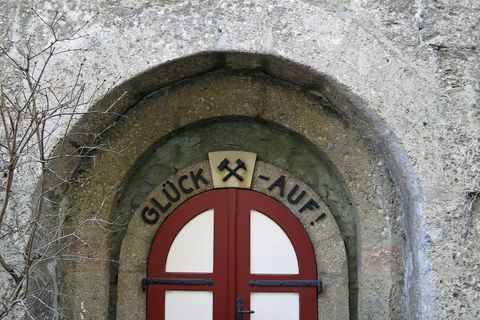